Once they are erected, metal buildings can look quite different. 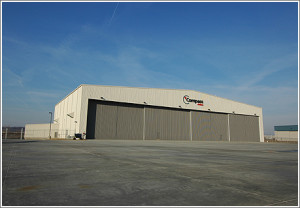 There are, however, a number of standard parts and configurations that are common to all.  This section concerns itself with standard types of materials, parts, and systems to show how they function to make up the entire building.

All metal buildings are built on top of a foundation.  The foundation is generally a concrete slab with concrete footings.  The footing is concrete, usually rectangular shaped, poured and formed under a column.  A footing distributes the load created by the metal building support member into the supporting soil.  Anchor bolts are set in the footing to “anchor” the column or structural members.

A metal base plate is a pre-punched metal plate which comes already welded to the base of the column or structural member.  The pre-punched plate fits over the anchor bolts.
If you were to take off the outside covering on the roof and walls of a metal building, you would see something similar to the illustration shown here.  This is known as the structural support system, and is divided into the primary support system and the secondary support system.